The 2017 El Niño could be the worst ever, and the downpours expected might overwhelm Southern California’s vulnerable flood control system. 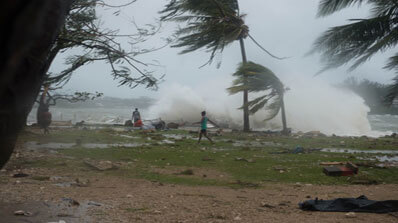 The 2017 El Niño could be the worst ever, and the downpours expected might overwhelm Southern California’s vulnerable flood control system. That could mean flood cleanup at your home — and lots of others. Not since the El Niño weather event in 1997-98 that resulted in 17 deaths has there been an El Niño this large. Some are calling it a Godzilla-sized event.

The Los Angeles area is supposedly ready for the event thanks to dam improvements made in 2004 and 2005. But Pasadena’s Devil’s Gate Dam has a lot of debris from the Station fire, creating the possibility of flooding downstream from it.

And that isn’t the only problem. Cities all along the coast of California are vulnerable to flooding. In some cases, widespread flooding is possible. In others, flooding might be localized. But if it’s your home hit by a flood, the flood cleanup isn’t made any easier by knowing how many of your neighbors are also impacted.

Ocean temperatures are now higher than they were in the summer before the huge 1997-1998 El Niño weather event that led to storms severely impacting much of California that winter. The event is called an El Niño because the temperatures in question exist in a Pacific Ocean region called Niño 3.4.

Sediment removal projects are planned for dams at Pacoima, Tujunga and at three locations in the San Gabriel Mountains. All have significant sediment buildup, and removing it would allow more room for runoff and reduce the chance of flooding.
Work on The Devil’s Gate is stalled because critics claim the operation will negatively impact wildlife habitats in the basin, mess up recreational opportunities and create too much truck traffic for local residents. These opponents want a small sediment removal operation.

Officials across the state are looking into other things that can be done to prevent flooding and the expensive disaster response for homeowners and businesses that may be an inevitable consequence of the El Niño event. In some areas, officials are asking for a complete investigation into the preparedness of flood control facilities like Devil’s Gate and others.

Previous storms have already shown that flood control in California is vulnerable. The dam at Devil’s Gate was built in 1920 following massive flooding and a huge flood cleanup effort earlier in the century, including the 1914 flood that sent a dozen or more homes and two markets down the river.

More recently, a 2010 heavy rainfall came a year after the Station fire and sent a mudslide into a staggering 40 or more homes. Debris from the mountain wedged a boulder weighing more than 10 tons into an important catch basin causing additional flooding.
As ocean temperatures in the critical region west of Peru rise to the highest levels of the year, benchmark location temperatures are up 3.4 degrees over last year. That’s higher than in 1997 when the massive El Niño resulted. Trade winds that cool waters west of Peru are also weakening. Experts say those trade winds would have to remain weak for a huge El Niño rivaling the previous record storm to result.

While a massive El Niño event could wash away several years of drought, many homeowners and business owners are left wondering if its worth it because of the risk of flooding and the hassles and expense of flood cleanup.

If you need flood cleanup in your home because of El Niño event or for any other reason, contact us at Orange Restoration at (619) 432-3381 for results that will ensure everything is put back to normal quickly and accurately.

How can we help you?

Mold and the The Effect It Can Have On Your Health